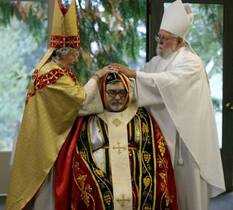 Apostolic succession is the term used to describe the transmission of sacerdotal authority from Jesus Christ to the apostles and from them to the bishops of the Church. Successive generations of bishops pass on apostolic succession, from bishop to bishop, in an unbroken line of consecrations (special ordinations) down to the present time.

​The Ascension Alliance derives its apostolic succession through several lineages, including from the Roman Catholic, Old Catholic, and Syrian Orthodox churches. While there has been a strong oral tradition from the very beginnings of the Christian Church, it was not until the sixteenth century when the Roman Catholic Church began to keep written records of these consecrations. We trace our principal western, Roman Catholic, line of succession from this source. See below:

Ascension Line
The Ascension lineage begins on 21 October 2006 when Richard Alston Gundrey consecrated
Alan Richard Kemp, Bishop for the Diocese of the Northwest (Catholic Apostolic Church of Antioch), who became the Interim Presiding Bishop of the Church of Antioch on 26 January 2009, who founded the Ascension Alliance on November 5, 2009, and who became its first Presiding Bishop. [Archbishop Kemp’s co-consecraters were Bishop Paul Clemens and Bishop Kera Hamilton. Bishop Paul Clemens was consecrated in 1988 by Archbishop Herman Adrian Spruit. Bishop Kera Hamilton was consecrated in 2005 by Archbishop Richard Alston Gundrey.]